The goal of the project was to reduce annual energy costs, including domestic water and boiler chemical costs, by shutting down the older central steam plant. This objective was achieved by decentralizing facilities receiving steam heating from the central plant and installing separate higher efficiency heating systems located directly in the buildings they serve.

The existing system consisted of a central steam plant with six – 60,000 lb/hr steam boilers which used natural gas or fuel oil. High pressure steam was distributed using approximately eight miles of lines to pipe both steam and condensate to 35 buildings and greenhouse structures. Due to leaks in the system, only 60 to 70% of condensate was being returned. During summer months, it was necessary to operate the central steam plant even though process loads were small, leading to extreme inefficiencies.

Projected simple payback period of 9.6 years (based on energy savings only) 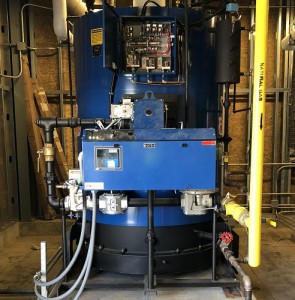 Nineteen efficient heating systems were installed within each building or group of buildings. Localizing the steam plant allowed for significantly better control of the non-heating loads seen during the summer.

Global Facility Solutions provided extensive services to WGL Energy, the prime contractor on this project. For project development, GFS conducted a central steam plant decentralization feasibility study. This analysis was used to develop the technical summary and engineering design for the installation of 19 decentralized boiler plants.

The boiler plant decentralization is part of a larger plan for Ft. Detrick to reduce energy usage and waste while utilizing renewable energy. The post is one of five pilot sites for the Army’s NetZero energy and waste programs.